During my second year of university I wrote a paper on the Chinese economy.  It was here where the magnitude of the inevitable global macroeconomic shifts, finally sunk in. Within the next 10 years China will be the biggest economy in the world. By 2050 its GDP per capita will be twice the size of USA’s.  The implications are enormous.  For the last 200 years the world has been governed by Europe and America. In this century, and in my life time we will witness the most extraordinary transition of wealth and power. As an entrepreneurial individual, I also know with great change comes great opportunity. I refused to let this enormous boat sail by. There was only one option. Go to China and learn Chinese.

I am also one to enjoy a challenge and was determined to overcome the urban myth that Mandarin is impossible.

After a traumatic experience with French at school, I hated the prospect of learning a language in a classroom. I was determined to prove that I could learn quicker by myself. Before I left, I read several books on memory, language learning and China. I had an exact plan on how to conquer Chinese. Everything from tools such as SRS systems to the exact vocab and grammar I wanted to learn. I built my own extensive curriculum. 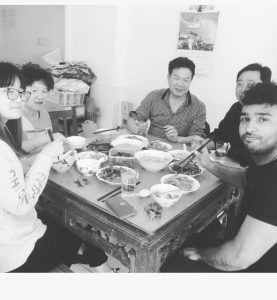 Words cannot begin to express my gratitude to the John Speaks Foundation. Quite simply, without their help I could not have financially afforded to learn Chinese. I will forever be in debt to the trust placed in me by the committee members.

Over 60 % of my scholarship was spent directly on my learning; private tuition, books, courses and software.  My experience was the last possible thing from fun and games. There were times I wanted to cry, becoming extremely frustrated with my brain for its inability to process the Chinese language quickly enough.  Perhaps the expectations I set myself were too high.  But looking back, the high expectations were the only reason I had learnt so much so quickly.

It is an unbelievably satisfying feeling speaking to another person in a language which was alien only several months ago. Without the John Speak foundation, I could not have experienced this feeling.

I do not use the word ‘alien’ lightly.  Chinese and English could not be more different if they tried.  Although initially stressful to arrange, looking back, the committees request that I live with a local was instrumental in my learning.  My flatmate Brandon was a priceless aid but now a life long friend.

Because of this scholarship I was able to experience a fascinating ancient culture and language.  I was able to build relationships which will last a life time.  But most importantly, I was able to achieve a childhood dream. Every intellectually curious young person has at some point said ‘I would love to learn Chinese’, although I am not fluent yet, it feels remarkable to say that I have done it and I am doing it!

I didn’t drive myself to the brink of insanity to only come this far.  My Chinese language learning journey continues until I am fluent.

Shanghai you were amazing.  The city itself is a bubble and not representative of the rest of the country.  Large parts of China remain poor and rural. But Shanghai is representative of China’s new money and new wealth.  It offers a real glimpse into the future of Chinese development and gives us an idea what tier 2 cities will soon look like; wealthy, prosperous and cosmopolitan.

For a long time I was jealous of multi lingual people.  Language learning is the most amazing stretch of intellectual ability, just in a completely different way to what we learn at school. Numerous studies show positive changes in neuroplasticity as a result of language learning.  My brain will never be the same as a result of this scholarship!

Once again, thank you.  I can make a promise to the foundation that your decision to invest in me will not have been in vain.