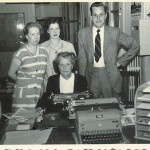 “It was wonderful to see that the Trust is still going and providing the same opportunities to young people after all this time.  May it long continue to do so”, Derek Platts.

Sixty years ago in 1954, I was 23, had recently completed my national Service in the RAF and was working in my first job in the export department of a large tool manufacturer in Sheffield when I saw an advert in the local paper inviting applications for a language scholarship with the John Speak Language Trust (it was called the John Speak foundation in those days). As I met the criteria of working in export and having a basic understanding of a foreign language – French – I decided to apply. After a rather scary interview at the Bradford Chamber of Commerce with a group of gentlemen who I understood were all involved in the wool trade, I was fortunate to be selected.

My employers agreed to give me 6 months leave of absence and arranged for me to work with one of their agents abroad. I was hoping to go to France, but in those days there was very little export business done with France due to restrictions imposed by the French government, so they arranged for me to go to Brussels.

The first thing I had to sort out was how to get there. That will seem an odd thing to say now, but back in 1954 there were no budget airlines, and normal airlines were far too expensive. One way would have been to get the train to London, then to Dover for the ferry to Ostend, but again this was quite expensive, so my firm came up with an alternative. We shipped a lot of tools from UK ports to Antwerp, so they fixed it for me to go as a passenger on cargo boat . I was the only passenger and we sailed late one night from Goole bound for Antwerp. I awoke the next morning somewhere in the middle of a very rough North Sea and did not feel good at all. Around mid-day I was invited to join the captain for lunch. I managed to sit down at the table with him but that was as far as I got before I was finally overcome with sea sickness, much to his amusement. 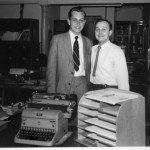 Eventually we got to Antwerp and I made my way to Brussels and found the office where I was going to work. I stayed the first few days in a youth hostel until I found a room with a lady who also provided full board. She had a shop with rooms above it in the Chaussee de Waterloo which was 10 minutes walk from the office and the centre of Brussels. Couldn’t have been better.

Also staying there was a German chap a Belgian student and also the landlady’s son, all like me in their early twenties. The only problem was that we didn’t have a language in common. The landlady and her son only spoke French, the student only Flemish & French, the German English & German but no French. So we had some very interesting conversations when we all sat down for a meal together!

Everyone in the office was instructed to speak to me in French which was hard for some of them who could speak English as they wanted to practice it. However, it all worked out very well and at the end of my six months I was able to carry out a reasonable conversation and also found it fairly easy to read anything written in French. I must admit however, that I was not very good at actually writing in French which was only to be expected considering that I had been learning by listening to people speaking without any actual tuition.  Not long after my return to the UK I had to accompany a senior executive of my company to Paris to act as interpreter as they had appointed an agent there in the hope of starting some business. I thought I was doing quite well but the French people I was talking to seemed to find it amusing which was a bit disconcerting, until one of them told me the reason. He said he had never heard an Englishman talking French before – with a Belgian accent!  I was quite pleased actually as it was a lot better than being obviously an Englishman trying to speak French and proof indeed that the best way to learn a language is by living and working with people who speak it.

I continued in the export trade for a number of years after that where my French continued to be of use until I had a change of career and went into the advertising business. At first there was no opportunity to make use of it until I got the job of organising a photographic shoot for a major car manufacturer. A basic requirement was to find a location where the weather was better than the UK, not too far away, with a variety of interesting scenery and locations and where it was possible to find places with not to many people about. Where better than France? So that is what I did, and it was so successful that over the years I repeated the exercise several times. Needless to say my knowledge of the language was invaluable.

I eventually retired and found that without regular use my French became more than a little rusty, but now I have found it returning again as my eldest daughter has been living in France for the last 7 or 8 years and I spend quite a bit of time there so I get plenty of practice.

I will be forever grateful to the John Speak trust for that scholarship so many years ago as my life has been so enriched by the opportunities it gave me.

It was wonderful to see that the Trust is still going and providing the same opportunities to young people after all this time. May it long continue to do so. 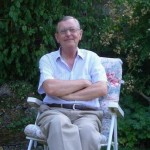