Posted on February 25, 2020 by Patrick Longmate 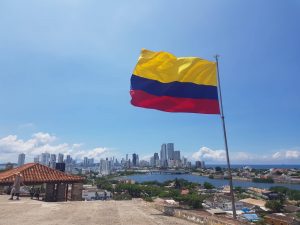 From July to December 2019, I had the privilege of studying at the Universidad de los Andes in Bogotá, as part of my modern
languages degree year abroad. My Spanish improved immensely whilst in Colombia, partly through daily exposure to the language in my university classes (which included Salsa – a cultural, if not academic prerequisite!). I was given the chance to develop my academic Spanish too, writing a 2500 word research project for a module on Colombian cinema, which involved an amazing trip to the Pacific Coast to meet some of the non-professional actors which made up the cast of the Colombian film El vuelco del cangrejo.  Here, and in other trips within the country, I was exposed to various kinds of (sometimes barely intelligible!) Spanish, helping me to appreciate the language’s rich diversity. I threw myself into Spanish socially too, and my best friendships comprised of Spanish speakers from all over the continent. Spending so much time with Mexican exchange students for example, was extremely enriching and made me appreciate just how diverse Latin America is culturally and linguistically. Indeed the contact I had with native speakers from at least 13 different Hispanic countries has left me confused and bewildered at the number of options I now have for calling someone my ‘mate’: pana, parce, wey, socio, veci, tío, hermano only touch the surface….

La Barra, a village located on Colombia’s Pacific Coast and where the film El vuelco del cangrejo was shot

To Colombians we are seen as cold and serious, and compared to Latinos we don’t know how to party or have a good time.

After a fare share of ‘farras’ and what feels like 100 salsa classes later, I can confirm that there is a degree of truth to this accusation, and believe that the principal cause of British sobriety at least, is the absence of dance in our lives.

The strong lesson I have learnt from my exchange is that in order to really know a place, you have to live there and interact with the locals in their language. Indeed, daily life abroad can be very rewarding as you discover all the hidden gems a tourist wouldn’t. For example the various broths, soups and consommés, which I ate on a daily basis in Colombia, were a revelation, and the famous caldo de costilla (a rib soup) has a well-known macondian power to cure a hangover. As if taken from a García Márquez novel, the soup is known as ‘el levanta muertos’ or ‘the resurrector.’

In conclusion, I am extremely grateful to the trust for facilitating my language learning abroad. The grant helped cover living costs and allowed me to spend an extra month in Colombia doing an intensive C1 Spanish course upon arrival.   I am also grateful to the grant for allowing me to develop my writing skills in Spanish through the monthly reports. Crucially, these have provided a platform to ponder and discuss aspects of Colombian culture, which has proved extremely positive and healthy. I am sure they will serve as an excellent archive for my unforgettable time abroad.