My John Speak scholarship took me the capital of Spain, Madrid, to support me as I took part in a year’s internship within the Spanish multinational company NH Hotels. After previously studying in the North of Spain for 5 months, my year working as a trainee Buyer within the International Purchasing Department of NH was about perfecting my use of the Spanish language and getting real experience in an International company.

The John Speak scholarship was a huge part of my experience abroad, giving me the financial ability to be able to submerge myself in the Spanish way of life and also travel the country that I was lucky enough to be able to call home. My time and travels here has opened my eyes to the Spanish culture, something you don’t see through the text books at University, and has made me appreciate even more how useful a second language is and will be for my future career.

I recently read a quote which really summarises how I feel about learning such an important second language such as Spanish and it says “The limits of your language are the limits of your world”. This is something I totally agree with and thanks to this year, and thanks to John Speak, my world has been opened to the 350 million people that speak Spanish as their native tongue in 21 countries over four continents.

Once again, I would like to say a huge thank you to John Speak and everyone involved in the scheme for letting me have such a memorable experience in Spain. I thoroughly recommend to anyone who is in a similar position to me to also apply! The next stage involves me returning to the UK to finish my University degree and I will keep the trust updated as to where my future takes me! 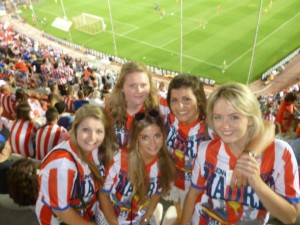