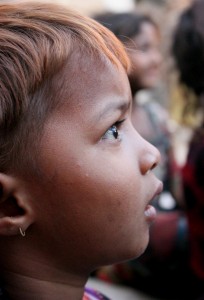 This young girl is being given some basic education along with about thirty of her peers. Classes took place once a week in the open air on a straw mat.

My John Speak Scholarship took me to Pakistan for a period of ten months to perfect my command of the Urdu language; widely accepted as the lingua franca of the Indian Subcontinent, a rich blend of Persian, Arabic and Turkish vocabulary with a Hindi grammatical base. Much like the English we speak today it could be described as a ‘mongrel’ of a language, but what a playful, diverse and beautiful mongrel she is!

Prior to my Scholarship I had been to Pakistan twice. During those short visits I had developed a keen interest in UK-Pakistan relations, and this was the initial impetus for learning the language. I was already an intermediate speaker, and my reading ability was well developed, but I simply could not express myself on the level that I wanted to. During my Scholarship, everything changed.
I spent the majority of my scholarship teaching in a large school, and this was a fantastic experience that really stretched me. However it was living with a Pakistani family that was the true catalyst for my language development. I found myself in such a diverse range of situations, and had to call on every noun, verb and adjective available to me: From attending colourful engagement parties and making speeches to large groups of young children, to hospital visits and running errands.
Possibly one of the most rewarding experiences during my Scholarship was participating in an education project in my spare time, which was run by the family I was living with. This involved working with the children from some extremely poor tribal communities, and being able to communicate love and encouragement to the children in a language they understood was an incredibly moving experience.

I hasten to add that my time in Pakistan was not always easy. I had to jump through multiple hoops in order to obtain the correct visa, and I often got discouraged during the initial period when I found it difficult to express myself. In addition I developed some health problems about half-way through my Scholarship, on top of having to go 6 hours a day without electricity (a daily occurrence in Pakistan). Despite all of these challenges I was given fantastic support by the Trust from day one, I couldn’t have asked for more.
Having previously interned at the British High Commission in the Pakistani capital Islamabad, I am champing at the bit to use my newfound language skills to further British interests in South Asia, economically, diplomatically and culturally. I’ll be keeping the Committee informed of my progress, and once again I’d like to express my gratitude to them for giving me this once-in-a-lifetime opportunity. 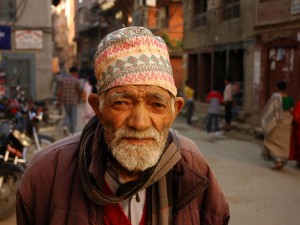 Edward Mortimer is spending 10 months in Pakistan studying the Urdu language. Here he recollects his first visit to the commercial capital, the megacity of Karachi.