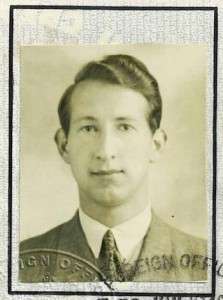 Opening a recent news bulletin from the Leeds Chamber of Commerce, a reference to the John Speak Trust immediately caught my eye.  I grew up knowing about the scholarships because my Dad was a fortunate recipient 65 years ago and the photographs and his tales about time spent in Northern France were a magical part of my childhood!  These souvenirs and his love of French went on to influence my career choice too so we both owe a great deal to the Trust.

Unfortunately Dad passed away 7 years ago but I am so proud of his achievements that I wanted to record his story in the John Speak archive.

Like so many in the West Riding in the 1940s, he began his career in the textile industry, working for Crosslands, a large wool trading company in Bradford.  He had excelled at French at Hanson Boys Grammar School (we still have his school reports!) probably to the surprise of his family who had no connection with France or foreign languages.  He would spend hours writing out vocabulary and even started teaching himself Spanish and a bit of German.  I am not sure what his initial role was at the company but by 1949 he was working as a Foreign Correspondent in the busy office, using French and a little Spanish.

He must have been so excited when he successfully applied for a scholarship which meant, having been given 6 months leave from work, he would at last be able to visit France and live and breathe the language and culture.  I think our mum, Kathleen, would have been a little less enthusiastic as they had been courting for a year or so when he announced he was going away for 6 months!  Unlike today, this must have seemed like an eternity; there would be no money to allow him to come back for Christmas and their only means of communication was by letter.  Dad bought a Kodak camera shortly after arriving in Ascq, near Lille, so at least he was able to send little self-developed black and white photos home to mum and his family to illustrate the places he visited and the people he met during his stay.

Included in the collection of pictures which we still have are shots of Lille, Brussels and Paris in 1949/50.  Two shots in particular became an iconic part of my childhood – one of the cathedral of Notre Dame from the river and the view from the Eiffel Tower.  Nearly 60 years later, with my husband and two daughters, we were able to recreate both photographs whilst on holiday in Paris and it was so emotional, thinking that Dad had been in both places all those years before.

Dad lived with the Bonte family in Ascq, the owners of a successful international wool company and, as required by the scholarship, had to write an essay in French each month to submit to the local chamber.  These were so treasured by Dad that we still have the original letters with his papers.  It was particularly interesting to note that, in response to Dad’s first essay, the letter he received expressed how good his French was but asked him not to seek help from his French friends!  Knowing Dad, he would have been incredibly indignant at the suggestion and although we don’t have a copy of Dad’s reply, the subsequent letter to him apologised and complimented him on using better written grammar than many native speakers!  He clearly didn’t realise how passionate Dad was about the language and in getting even the smallest detail right! 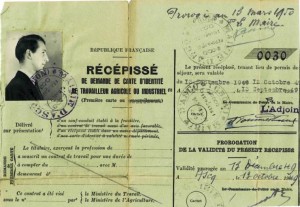 After his return to England, he continued to work at Crosslands as a Foreign Correspondent and married Mum in 1952.  In the late 1950s, seeking a higher salary to support starting a family, he left the textiles industry to work at Grattan Mail Order, where he would regrettably have had little chance to use his language skills.  He remained there until his retirement.

Fortunately he was able to pass on his enthusiasm for languages to me – enjoying following my progress through to my achieving the Diploma for Foreign Correspondents at Bradford College in 1979, for which I had to study French, German and Spanish.  I then went on to actively use my languages in export sales at various engineering companies in Bradford for over 10 years and have many happy memories of corresponding daily with overseas agents and travel to Germany and Austria.

It was so good to read that the scholarships are still being offered – long may it continue!  It’s all too easy in this day and age to expect everyone to speak English but if you can make it easier for others to communicate with you, it may well make all the difference for the success of your business. 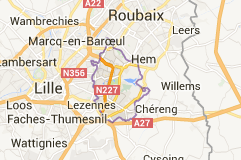