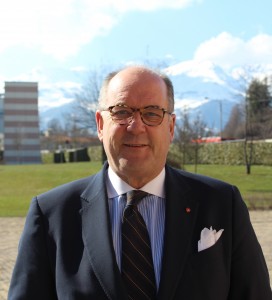 I decided to apply for the Scholarship in 1971 with a view to spending a few months in the Lille area of Northern France in early 1972. I had an O level in French and had spent every summer since 1958 on the Côte d’Azur near Monaco. I was ‘reticent’ in French and badly in need of a séjour that would require that extra effort immigrants need to survive in a foreign language. Few spoke English in Northern France, so it was in at the deep end and totally immersed as teachers say from day one, I set foot on French soil one dull January morning in 1972.

My French master at Woodhouse Grove advised me to ‘parallel’ my every day learning experience with some academic French study. It is strange how you more readily accept advice from teachers after you have left school and I will be eternally for the late John Bryant’s gems of wisdom. He suggested learning a skill in French without any reference to English and to read Maigret books by the Belgian author Georges Simenon. Several of these well-written detective novels are set in Flanders or Le Plat Pays immortalised by the songwriter Jaques Brel, another gifted Belgian.

I managed, via the textile grapevine in Bradford and Lille to find work experience at Delabart Mallet, a former cotton spinning mill in Loos, owned by the British textile conglomerate Courtaulds that had been converted to acrylic yarn manufacturing.  It was there I learned textile processing in French from scratch. Studying a subject independent of your mother tongue was some of the soundest advice I received in the early 1970s.

Through family connections, I found a room in an immense Flemish style patrician mansion in St André, just outside Lille belonging to Charles Delobeau. Charles was from a leading textile family in Valanciennes and had married Francoise, the daughter of Auguste Scalbert, Lille’s leading banker. Dinner at 159 ave Général Leclerc was always en famille in a beautiful empire style dining room in a house full of treasures from a bygone age. Conversation rather than television was the order of evening and it was here I learned first hand, as it were, of the suffering in Flanders in two World Wars and in the Franco Prussian War of the 1870s. Charles once drove me across the border to Ypres, just 15 km away in Belgium where hundreds of thousands of troops had perished in trench warfare. When I saw the Bradford Pals had fought and died there I began to understand the importance of this region for the UK. In a remarkable act of reconciliation in 1950, Robert Schuman, the French Foreign Minster and Konrad Adenauer, the West German Chancellor decided this sort of mindless nonsense should never be allowed to happen again and created the European Coal and Steel Community, the forerunner to the EU.

So it was the John Speak scholarship that helped convince me of the need for European unity at a time when the UK was agonising over membership of the Common Market in the run-up to the fair referendum of 1974. Sound familiar?

Gaining a near native command of French and subsequently Italian has secured seats on boards of some of the key organisations in the global wool and trade fair industries. I rather enjoy the reputation of being a British European. More to the point, fully understanding another culture is a true joy and I gather bilingualism is excellent for the continued health of the mind.

I’m writing this piece on the Thalys as we speed towards Paris from Brussels at 220 kph on the fast tracks of the TGV in a now borderless Europe. As we cross the Somme I think of the turmoil in this region just one hundred years ago and the carnage on the battlefields where my grandfather’s generation served. We have arrived on time in the Gare du Nord and I will be at a dinner at Le Dôme in Montparnasse, just two hours and twenty minutes after leaving the Brussels office. I wonder how long it would have taken John Speak to make the same journey when he was thinking of setting up his scholarship in the 1930s.