In January 1961 (age 20) I boarded the train from Harwich via London followed by a short ferry journey to Holland.  Another train journey took me to Breman Germany where I would stay for six months. 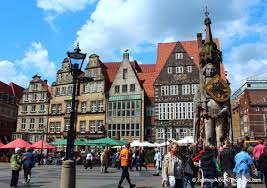 Statue of Roland in Altmarkt in Bremen, Germany

On arrival in Bremen I was very homesick having never been away from home before.  I arrived in January and it was extremely cold, minus 12-15C walking to work to start at 8.00am. The wool broker and merchant where I worked (Schmacht & Co) in the wool sample room, had several apprentices my age who made me very welcome and I soon had a social life. The older staff members were very formal with me and among themselves, which was the German way.

The initial problem was the speed of the spoken word (almost incomprehensible) and understanding conversations in the local accent and what was said to me. My grammar school German lessons never prepared me for this. I worked very hard as a volunteer and was rewarded with a salary and as I ran out of bursary (£50) at each month end this was useful. I wrote down all new words and phrases and learned them by heart.  I had to provide a written report in German back to Bradford Chamber of Commerce every month.  The elderly German couple I lodged with spoke no English and took me off with them on weekend excursions from time to time providing a wonderful opportunity to experience Germany.

Once my knowledge of German improved I was allowed to use the company phone to talk to customers and to arrange wool processing at the local Bremer Woll Kaemmerei woolcombing plant.

As I contributed a little to the running of the wool broker business, my confidence in spoken German grew dramatically, including a few words not socially acceptable fed to me with glee by my younger work colleagues!

I was invited to spend time out of work with some of the families of my fellow employees on a regular basis and I really appreciated this kindness.

Unfortunately while out running in woodland one day, I fell and sustained a bad knee injury and spent exactly one month in hospital following a knee operation.

The 1961 the DM/£ exchange rate was around DM12/£1 and the DM was revalued while I was in Germany giving me 5% less bursary.  Contrast this with about DM3.2/£1 when the Euro was established.

Later in life, my time in Germany provided an invaluable asset when establishing business contacts in Germany and Austria after setting up my own wool waste export firm.  I then moved to processing and exporting synthetic fibres.

I would not hesitate in recommending the John Speak Trust to language students.

Learning another language was not only beneficial to my career but also educational and character building.  The opportunity of living and working in Germany whilst studying, allowed me to experience the local culture first hand, a vital lesson for business.

The City Municipality of Bremen is a Hanseatic city in northwestern Germany. A commercial and industrial city with a major port on the River Weser, Bremen is part of the Bremen/Oldenburg Metropolitan Region