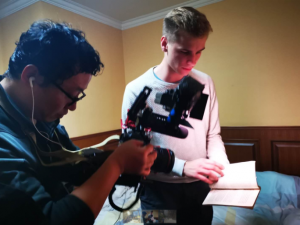 Being filmed by Youku (Chinese Youtube) about my life in Beijing

As part of my undergraduate degree, I spent a year abroad in Beijing where I enrolled at Peking University. The course at Peking University consisted of all key areas of the Mandarin language, including areas such as speaking to newspaper reading, and even advancing our skills in classical Chinese. The excellent teaching meant that I continued to improve throughout the year, and could iron out issues that had previously been causing been problems. 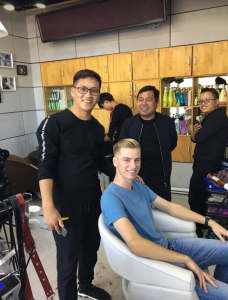 Getting my haircut in Inner Mongolia

However, as most students would probably agree, time outside of class was just as, if not more, enjoyable. But also, crucially, I would argue, absolutely vital to my language and cultural acquisition. It was by travelling to various parts of China that I got to grips with the cultural, linguistic and geographical differences of the country.  This oft-perceived heterogeneous nation is in fact bursting with idiosyncratic and dynamic cities and provinces. 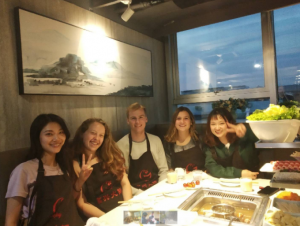 Throughout the year, I visited a good number of different cities and areas. I started off visiting the barren ghost city of Ordos, Inner Mongolia, in Golden Week, before subjecting to myself to temperatures of -20C in Harbin in December. I then thawed out in Yunnan, Sichuan and Guangxi during the week of spring break. Here, the chance to escape the concrete jungle of Beijing and discover the breath-taking natural landscape of China was a welcome one: hiking 20km with 2km of ascent/descent in Tiger Leaping Gorge was a favourite memory of mine, closely followed by a 40km bike ride surrounded by the imposing Karst mountains in Guilin. Travelling also proved to do wonders for my aural and oral skills; conversing with locals from all over the country made me practise no end and forced me out of my comfort zone. However, it also showed me the gulf I still need to overcome; the Naxi minority of Yunnan (speaking Mandarin as their second language) was especially tricky to understand!

This opportunity to travel has been solely down to generosity of the John Speak grant which relieved me of the financial burden this year. The grant also encouraged me to find an internship related to my future career plans. 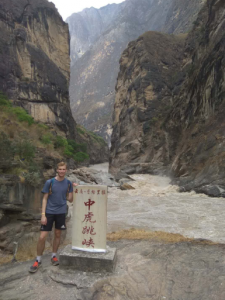 At the bottom of the Tiger Leaping Gorge

Consequently, I worked as an unpaid intern at Trivium China, a political consulting firm, which presented me the challenge of reading policy documents, newspapers and other primary sources in Chinese, as well as contributing to bespoke consulting projects within the team. It has confirmed my interest in the field and has undoubtedly been a great asset to my CV! The monthly reports also served to reflect on my time throughout the year but also help practise my writing skills on the topics that were of interest to me. Funding for year abroad students is still exceptionally hard to acquire, thus I am extremely grateful to the John Speak trust and would recommend any student wishing to study abroad to apply for their grants!