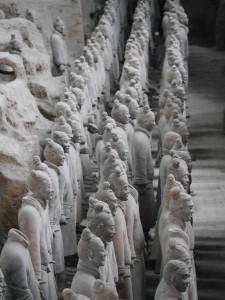 Despite living in China for the last 10 months, there was one key sight I had yet to see: perhaps the most famous of them all – the Terracotta Warriors.  A friend from home’s visit gave me the perfect excuse to escape to Xi’an for a few days to show him the sights and tick off the final item on my China bucket list.

We decided to take the cheaper overnight train on the way there. This was quite a different experience to a trip on the bullet train, and gave my visiting friend a baptism of fire in adjusting to cultural differences. We were quite the spectacle in the station full of migrant workers and tradesmen carting huge sacks of produce to and fro. Fortunately on the train itself we were at the top of the triple bunk beds so avoided the plethora of curious stares.

We arrived in Xi’an and went straight to the Terracotta Warriors. Having heard tales of the exhibits being so crowded that it was impossible to even get a glimpse, I had prepared to be disappointed. However, the reality couldn’t have been more different. The first thing I noticed was the sheer size of the main pit – it must be around the size of a football pitch, if not larger. However, it is the detail  that is most impressive – each warrior has a unique face and expression.

Xi’an is known almost exclusively for the Terracotta warriors for a good reason – despite once being the capital of China, there is sadly little left from its former glory days as the capital of an ancient civilisation. Instead industrialisation has become the main priority and engulfed the city in smog and factory infrastructure.

While Chinese history and culture may be in short supply, Xi’an has become a hub for Chinese Muslims. The main street in the Muslim quarter is a bustling avenue of neon lights and fragrant Chinese-Arab delicacies. The interesting blend of cultures is personified by the cuisine – we were treated to tagine style beef served in a Chinese pancake.

The only remaining relic of Xi’an’s rich past is the majestic city wall. We hired tandems to cycle along it, but unfortunately Xi’an showed its roots as a centre of industry and the pollution was so bad we could barely see past the edge of the wall. This did however make for an interesting contrast of old and new China, a juxtaposition I have grown to realise in an intrinsic part of China today.