At the end of June my Chinese course concluded and two weeks later I officially graduated from Beihang University. In addition to passing my university exams, I also recently passed the HSK 6 exam, which is the most advanced level of official Chinese exams for foreigners (comparable to the IELTS exam for english learners). Although I’ll miss attending daily Chinese classes, I’m also excited for the next stage of my life and I’m pleased with the progress I’ve made in learning Chinese over the past year. At the same time, I hope to continue improving my Chinese in the future and rather than not studying because I’m too busy with other commitments.

Having already graduated, I had some time in July to go travelling. Recently, I visited Suzhou, which is an ancient city near to Shanghai. Suzhou’s most famous tourist spots are its classical landscape gardens. The gardens I visited are the Humble Administrator’s Garden, the Lion Grove Garden and the Lingering Garden. These gardens are all exquisitely designed and very beautiful, walking through the gardens is very relaxing and a good way to experience China’s rich and ancient culture.

My favourite activity in Suzhou was going to watch pingtan one evening. Pingtan is a type of traditional folk music from Suzhou. I first became interested in Pingtan after watching a TV drama (都挺好）in which the main character often goes to watch Pingtan in a teahouse. After watching this show I was very keen to experience pingtan myself. Pingtan usually features two singers, the singer on the left hand side also plays a sanxian (a type of three stringed plucked instrument) and the singer on the right plays a pipa (a Chinese lute). The two performers sing and play together, with the songs mainly about ancient love stories and other folk legends. Pingtan is sung in the Suzhou dialect, which sounds very different to Mandarin Chinese, but although most people can’t understand the lyrics of pingtan, people still like to listen anyway.

The last place I visited in Suzhou was Suzhou museum. Suzhou museum is located in a very interesting building that was designed by the famous architect I.M. Pei. The museum design is a fusion of modern and ancient architecture together with Suzhou’s traditional landscape garden architecture. The museums holds a large collection of rare items, including many items from Wu State. Wu State is an ancient kingdom (existing from around the 12th century BC to 473 BC). It was located in the Suzhou area. Wu State had a very rich culture, which greatly influenced later culture in Suzhou. I think it was a great choice to visit the museum last, because having already visited a range of historical sites, I already had some awareness of the history and culture when I visited the museum, which allowed me to appreciate the design and contents of the museum better. 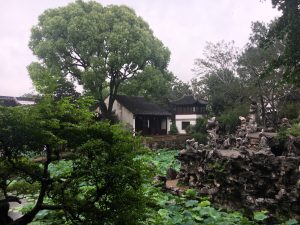